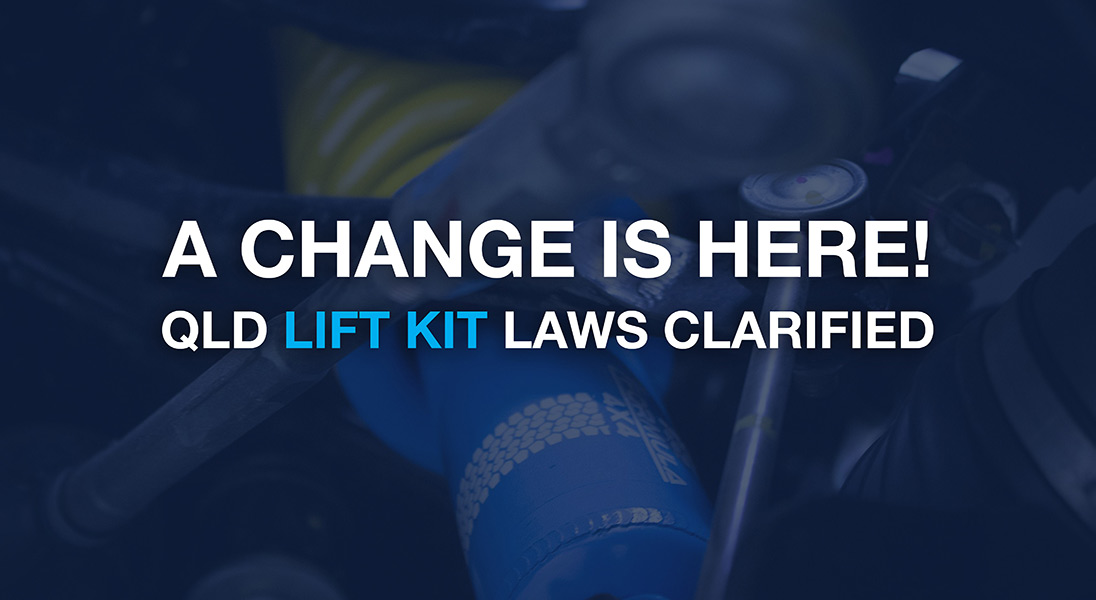 The QLD government has come out with a statement and we couldnt be happier!

As we have previously mentioned on social media and our website. Fulcrum Suspensions has been working with various stakeholders to respond to the government’s actions in relation to 4x4 Lift Kits in vehicle. With Fulcrum’s managing director, Graham Scudamore-Smith, being the President of the Australia Aftermarket Automotive Association and the issue being related to suspension it was something particularly important to us.

Queensland Police launched a movement, ‘Operation Lift’ on the 4th of September 2018 which had been targeting lifted 4x4’s on Queensland roads and issuing them with fines, defect notices and in some cases impounding vehicles. Owners of lifted 4x4’s with Electronic Stability Control (ESC) had no notice before this movement and those that had previously fitted 50mm of suspension lift and 25mm in tyre found themselves in trouble.

As of the 20th September 2018, the Queensland Transport and Main Roads Minister, Mark Bailey, announced that there would be a reform to the laws that cover lift kits in vehicles.

On September 24th, 2018 Fulcrum Suspensions attended a Transport and Main Roads forum held by the Vehicle Standards team in Brisbane regarding the vehicle lift laws. A room full of industry leaders and members of the Approved Person network for suspension, 4WD modifications and tyres ensured several questions were raised surrounding the Queensland lift laws.

Andrew Mahon, General Manager for Transport Regulation addressed the room covering key points from penalties, the current laws, the upcoming law changes and Electronic Stability Control (ESC) testing. The laws regarding vehicle lifts in Queensland have been said to be very unclear for individuals to interpret, Mr Mahon began by clarifying these laws.

There were a few industry professionals in the room who too were unsure of these laws before Mr. Mahon’s clarification, causing much discussion about the way the laws are written and presented. It was then presented that penalties not only applied for the driver of an illegally modified vehicle but also for the owner, modifier and any approved person.

The changes to LS9 and LS10 in the code look set to happen in October 2018 – the current laws within the code and the changes can be seen below.

Fulcrum Suspensions are the suspension specialists, fitting and/or selling 4x4 lift kits most days of the week. All suspension kits available through Fulcrum Suspension comply to 50mm lift ruling with different rated spring options. When supplying 4x4 Lift Kits our technicians will ensure to ask about constant loads, towing requirements and accessories (whether fitted or soon to be fitted).

Below are the current and future lift laws as presented by Queensland Transport and Main Roads Vehicle Standards team.

*Lifts above these limits require individual approvals from TMR.

This has been a big win for the Queensland 4x4 community!

This reform will allow a lift of 75mm on an ESC equipped vehicles, under their owner certification rules. Meaning there will be no requirement for these suspension lifts to be tested and certified. This brings Queensland in line with the rest of Australia's state laws and the national code. Previously Queensland has allowed this lift on non-ESC equipped vehicles. Other changes in this reform include the maximum lift able to be tested and certified, which will raise from 125mm to 150mm.

The Honourable Mark Bailey, Minister for Transport and Main Roads has said ‘Our aim is to balance road safety with allow 4WD enthusiasts the flexibility to manage their driving needs.’ He plans to continue consulting with industry professionals on aspects of the code which includes how to best maintain ESC functionality.

Queensland vehicle lift modification laws will change to be more consistent with other jurisdictions for 4WD motorists across the country after consultation with 4WD groups over the last few months.

Transport and Main Roads Minister Mark Bailey said he was pleased to announce the first major changes for Queensland’s 4WD lift laws since the Newman Government lift laws were introduced in 2012.

“Next month we will be changing sections of the Queensland Code of Practice, which governs vehicle lift rules,” Mr Bailey said.

“These changes, which follow consultation between my department and industry, will raise the maximum lift certifiable in Queensland from 125mm to 150mm.

“Importantly, this will make Queensland’s maximum lift, with certification, consistent with the National Code Practice and other states.

“For vehicles with Electronic Stability Control (ESC), vehicle owners will be able to raise their vehicles up to 75mm (incorporating a maximum of 50mm suspension and 25mm tyre increase) without certification.

“Queensland already allows such a lift for non-ESC equipped vehicles.

“The move to 75mm without certification, for ESC vehicles will ensure consistency with the rules in NSW and Victoria.”

Mr Bailey said Transport and Main Roads would continue to consult with industry on other aspects of the code, including how to best maintain ESC functionality.

“Our aim is to balance road safety with allowing 4WD enthusiasts the flexibility to manage their driving needs,” he said.

The final version of the new Queensland Code of Practice will be released in October.
For more information, contact Transport and Main Roads on 13 23 80.

Here at Fulcrum Suspensions we are dedicated to ensuring we are providing our customers with the most up to date information relating to their vehicles suspension and it was no different in this instance. Visit your local Fulcrum Suspensions store to see what we can do for you,

The final version of the new Queensland Code of Practice will be released in October. Get in touch with Fulcrum Suspensions for all your 4X4 Lift kit needs!

With over 40 years of industry experience, we can get you pointed in the right direction.

FULCRUM's Most Wanted Our Most Searched for Products

Microsoft Internet explorer is at the end of its life and is no longer supported, this poses a security risk. As such the Fulcrum website does not support Internet Explorer.

If you are using Internet Explorer to browse this website, you may get unexpected errors when viewing pages or purchasing products through our checkout.